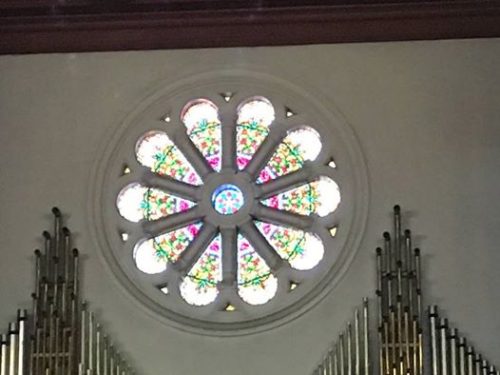 We will rally at 5pm at First Congregational Church of Oakland, 2501 Harrison Street, and join faith leaders on a procession to honor local Native sites and demand that financial institutions divest from projects that desecrate sacred sites. We also call on our family of faith, our congregations and our denominations to pull their funds out of these deplorable institutions.

Call for:
• Banks to divest from the Dakota Access Pipeline (DAPL)
• Learn the histories of people who have lived here for thousands of years, and support Ohlone organizing efforts to protect sacred places
• Our faith communities to divest from implicated financial institutions

5:00 PM, March 21st – Faith Resistance March to Divest
2501 Harrison Street, Oakland6:45PM, March 21st – Decolonize Our Faith(s)
All are invited to this showing of the film, Beyond Recognition (28 mins), and discussion with Corrina Gould and Johnella La Rose, Co–Founders of Sogorea Te Land Trust and Indian People Organizing for Change (IPOC).The procession will be approximately 1-1.4 miles long, with several stops along the way. We can communicate the route to you individually by text if you would like to join by car, and are hoping to have an accompaniment vehicle available, as well. Please email: kathryngilje@gmail.com or put it in the comments here with that request.Following the march, we invite you to join us at First Congregational Church of Oakland for the film Beyond Recognition and for a community conversation with Corrina Gould and Johnella La Rose, co-founders of the Sogorea Te Land Trust. Gould and La Rose will open the event by helping us understand the space and place where the church stands and the land around the area of Lake Merritt, and the histories of the people who have lived here for thousands of years.

Corrina Gould and Johnella La Rose will open the event by helping us understand the space and place where the church stands, the land around Lake Merritt, and the histories of the people who have lived here for thousands of years. After the film, Corrina and Johnella will answer questions, share current Ohlone organizing efforts, and ways to be effective allies from their perspective.

About the film, Beyond Recognition, made by Michelle Grace Steinberg: After decades struggling to protect her ancestors’ burial places, now engulfed by San Francisco’s sprawl, a Native woman from a federally unrecognized tribe and her allies occupy a development site to prevent desecration of sacred ground. When this fails to stop the development, they vow to follow a new path: to establish the first women-led urban Indigenous land trust. Beyond Recognition tells the inspiring story of women creating opportunities to preserve Native culture and homeland in a society bent on erasing them. Through cinéma vérité, interviews, and stunning footage of the land, the film introduces Corrina Gould, Johnella LaRose, and Indian People Organizing for Change as they embark on an incredible journey to transform the way we see cities. The film invites viewers to examine their own relationship to place, revealing histories that have been buried by shifting landscapes. Beyond Recognition points to the intersection of human rights, women’s rights, and environmental protection, spotlighting a California story that has worldwide resonance.